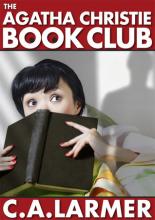 When Alicia Finlay walks out on her boring old book club and decides to start a new one—one devoted to her favorite mystery writer Agatha Christie—little does she know her new club is about to stumble into a mystery of their own. It's a mystery so baffling it would leave even the Queen of Crime scratching her head...

After gathering seven crime buffs together—including young librarian Missy (as ditzy as Miss Marple and as sharp), fashionista Claire, paleontologist Perry (both stylish and fastidious like Poirot), dashing Dr Anders, a poisons expert, and socialite Barbara Parlour—Alicia grows suspicious when one of them fails to show for the next book club.

Barbara has disappeared from the face of the earth and her arrogant husband, Arthur, seems coldly unconcerned. The group suspects him of foul play until he suddenly shows up dead. With two baffling mysteries and time fast running out, the book club decides to do as the meddling Miss Marple would do and investigate!

So begins the first exciting instalment of the Agatha Christie Book Club (ACBC), a motley collection of amateur sleuths who use Christie as their guide to help solve a range of mysteries that fall into their lap. Following in the footsteps of Hercule Poirot and Miss Marple, the group must sort the clues from the red herrings to solve the murder of Arthur Parlour and determine what happened to his missing wife. Has she been brutally murdered or is she somehow, somewhere still alive?