All refugees welcome in Australia!

In 2023, Australia reversed its closed border policy and said to the world: ‘Welcome! You are free to come to Australia, but you must spend the first seven years in the Temporary Citizenship Zone around the Ord River.’

Seven years later, Ord City is a teeming Asian metropolis with 2.5 million people preparing for the First Wave – the first tranche of refugees gaining full citizenship – on Australia Day 2030. But mainstream Australia is passionately divided over Ord City, not least because of the risk of letting in terrorists, and dark political forces are bubbling to the surface.

Agent Conan Tooley is sent up to Ord City to look into a routine gangland murder, but finds himself frustrated and confused by the questions that arise at every step.

As the days to the First Wave count down, Conan encounters any number of people throwing up obstacles, including The Army of God (a Christian charity active in Ord City); a carload of young people travelling to Ord City for the Illumination Festival the night before the First Wave; and Asif, a deep cell terrorist with a deadly mission. There is also the Shadow Group – mysterious figures who seem to be pulling strings at high levels to achieve some hidden purpose.

As the various subplots wind towards the explosive conclusion, the motives and values of all are profoundly challenged.

Welcome to Ord City is a satirical crime thriller set against the backdrop of Australia’s refugee policy and the malleable populism that characterises the Lucky Country in the C21.

Adrian Deans was born on 15 October 1959 and grew up in a happy home on Sydney’s northern fringe. It was a different world then – toys were made of metal or wood; televisions were black and white (and not every family had one); there were no such things as mobile phones, personal computers or iPods; and rock stars (such as they were) still wrote their own songs. 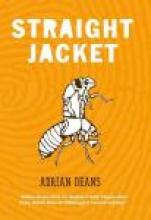