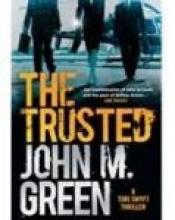 How far would you go to save the planet? ...Would you destroy it?

Imagine a global depression caused, not by greed or stupidity, but by a secret band of brilliant and radical environmentalists, 9S, using cyber-terror to slash the world’s population and smash its resource-hungry economy. Members of 9S have spent ten years secretly infiltrating industry and government, working themselves into the most trusted jobs in the world...sleepers ready to act.

When the first global catastrophe erupts, the finger points at Australian-born Dr Tori Swyft, a former 9S member recently forced out of the CIA. Can the dark 9S conspiracy be stopped before it’s too late?

They are the most trusted… until they betray their trust.

When it dawned on John that what got him up in the morning was writing not his day job, he quit the job. Until then he was an executive director in a leading investment bank. Much earlier he'd been a lawyer, a partner in two major law firms. As well as a novelist, he is a well-known business writer and commentator and his non-fiction writing has appeared in a variety of publications in Australia and overseas. As well as writing, John is a board member of two stock exchange-listed corporations and a not-for-profit, as well as a co-founder of Pantera Press