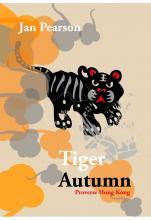 In 1964, young Hong Kong socialite Pearl Green is jolted into adulthood by the murder of her mother, the prominent philanthropist and Foreign Office operative, June Bowen. The end of the Cold War is close when China enters the nuclear power race and after completing the development research, the scientist Dr Lin Dei is exiled in a mood of politically motivated anti-intellectualism that sweeps across the country. He is sent to a remote province and after smuggling his original work out of the research facility, leaves faked data behind. In late September, realising that the deception will soon be discovered, he escapes, in dramatic circumstances.

Lin Dei’s flight is known to Peter Benson, former lover and colleague of June Bowen and Chief of Hong Kong’s covert Asia Watches. Peter picks up on Lin Dei’s escape and after confirming through his China contacts that the scientist has escaped with sensitive information, arranges his entry into HK. The operation is sabotaged by competing agencies and nineteen year old Pearl is unexpectedly forced into protecting Lin Dei from people she thought she could trust.

During the days leading up to the atomic bomb test, Pearl and her mother take readers on a journey through old Hong Kong to save Lin Dei. The Walled City of Kowloon still stands and is graphically described as is the Leprosarium on Hei Ling Chau Island. In a society dominated by Caucasian expatriate wealth and interests these centres of poverty, disease and corruption teach Pearl some lessons she would never learn over high tea at the fabled Peninsula Hotel.

June and Pearl become isolated from all sources of help and as June faces treachery and is killed, the course of Pearl’s comfortable, high profile life changes forever as she hunts for her mother’s killer and is confronted with the true identity of her father; whilst Dr Lin Dei finds a unique solution to the moral dilemma he inadvertently created on the night he fled from China.

Janet Ryan has written this first of The Celestial Symbols crime quartet under the name of Jan Pearson. Pearson draws material for her books from her life experiences and memories of living in Hong Kong during the 1960’s. An Australian, she has lived in the Northern Rivers region of New South Wales for thirteen years. Tiger Autumn was published in Hong Kong this year and was launched in Australia in October.