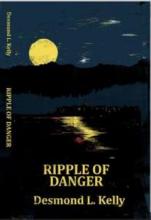 It seemed like such a good idea. Lockie, a retired New Zealand schoolteacher, moves to Macleay Island, in Australia's Moreton Bay after the death of his beloved wife. He settles to the subtropical island's lifestyle and makes friends with the local characters, but his peace is disrupted when he rents the other half of his duplex to an ex-model, Renata, and her seven-year-old son, JJ.

After two near fatal incidents Renata convinces Lockie she is being threatened by her ex-partner, retired rugby league superstar Big Joe Hayson, a multi-millionaire who owns The Stud, a Brisbane nightclub. Joe, it appears, wants her and the boy dead. She decides her only hope is to kill him first.

Lockie doesn't like that idea and does his best to help Renata against Big Joe, his two formidable henchmen and the dark underbelly of Brisbane. All he has is courage, cleverness, humour and his belief in justice, but one night, it lands him in The Stud nightclub, and Lockie is fighting for his life.

I live on a subtropical island in Moreton Bay about an hour from Brisbane, Australia. It’s a nice place with good people. Born in the Blue Mountains of Australia, I was whipped off to New Zealand at the age of four, after my mother had one row too many with her mother-in-law. They were a pair of feisty women. I was 77 years of age before I returned to live in the country of my origin. I am therefore, Australian by birth and a New Zealander by culture, a fearsome state of confusion which has led me to believe that literature is my safest nationality. Did I come back to Australia to live out of yearning for the place? Not really. We, my wife and I, came here because our three surviving children had come here to live and work and because the climate is warmer. I trained as a geologist, but that was a wrong turn. I became a school teacher, which I loved, and followed for just over 20 years at primary, secondary and tertiary levels until at 49 I became a professional actor working in film, television, stage and radio on both sides of the Tasman Sea. All that time I wrote. I’m not very good at doing two things at once so writing came a poor second to the job and providing for a family, but now – now I am retired and I can follow my heart’s desire – now, I can write every day. And I do. I live with my patient wife in a lovely little house on the island and do my best to enjoy life.