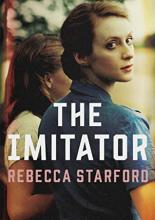 Out of place at boarding school, scholarship girl Evelyn Varley realises that the only way for her to fit in is to be like everyone else. She hides her true self and what she really thinks behind the manners and attitudes of those around her. By the time she graduates from Oxford University in 1939, ambitious and brilliant Evelyn has perfected her performance.

War is looming. Evelyn soon finds herself recruited to MI5, and the elite counter-intelligence department of Bennett White, the enigmatic spy-runner. Recognising Evelyn’s mercurial potential, White schools her in observation and subterfuge and assigns her the dangerous task of infiltrating an underground group of Nazi sympathisers working to form an alliance with Germany.

But befriending people to betray them isn’t easy, no matter how dark their intent. Evelyn is drawn deeper into a duplicity of her own making, where truth and lies intertwine, and her increasing distrust of everyone, including herself, begins to test her better judgement. When a close friend becomes dangerously ensnared in her mission, Evelyn’s loyalty is pushed to breaking point, forcing her to make an impossible decision. A powerfully insightful and luminous portrait of courage and loyalty, and the sacrifices made in its name.