I know ... I know .. I know. What on earth am I doing. I'm not even slightly into all this vampire stuff. But there were snippets of this book that I noticed as the ebook prep was rolling along, and I do kind of like a dry, laid back sense of humour, so I figured if I was EVER going to get the whole vampire thing... this might be a book to try.

Lissa Wilson has had one hell of a year. When people she cared about kept turning up dead, she discovered that The Opposite of Life is not always death – at least, not final death anyway. When they tried killing her too, life went from bad to worse.

On the plus side, she made a friend.

Gary Hooper may be the most inept vampire in the world, but he’s taught Lissa the real value of life and so has become possibly the best friend she’s ever had. But, like everyone, Gary has secrets. Secrets that could end their friendship, if Lissa ever discovered the services he provides the undead community.

So what is an ordinary geek-girl librarian to do when hardcore vampire killers begin knocking off the vampire population of Melbourne? She may have no battle skills, let alone supernatural strength, but is that enough to stop Lissa from throwing herself into mortal danger (again) and risking everything to save her bestie?

Lissa discovers that everyone has secrets, everyone gets trapped by their own history. How many can learn to change? How many will live long enough to try? 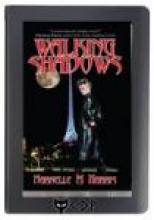 Lissa Wilson’s life hasn’t been quite the same since people she cared about started getting themselves killed.

And Lissa learnt that the opposite of life is not always death. On the plus side, she made a new friend.

Gary Hooper may be the worst best-friend a librarian could have – and easily the worst vampire ever – but he has taught Lissa the real meaning of life.

Gary’s worldview has also improved remarkably since meeting Lissa, but all that could be lost if she discovers what services he provides Melbourne’s undead community.

Meanwhile, as their friendship brings him closer to the humanity he lost, it also puts them both in grave danger.

And there’s a big chance that the evil stalking them could them both killed – in his case, for good this time.